Episode #1493 Helaine Knapp: How To Train Your Mind To Take Risks 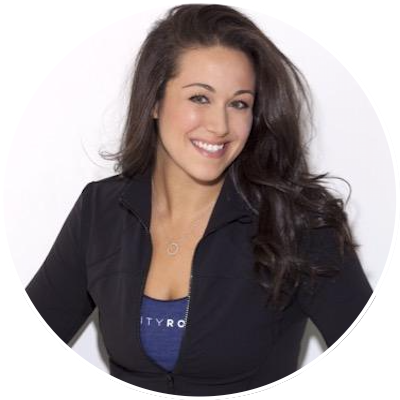 CITYROW CEO and Founder Helaine Knapp and Jenna discuss how to train your mind to become more confident, take bigger risks, and detach from outcomes. We also chat about the importance of adopting a long-term health mindset.

How To Train Your Mind To Take Risks

When Helaine Knapp was helping her parents pack up her childhood home, she stumbled upon a letter from her late grandfather. Inside, was a magazine clipping about rowing, an up and coming sport he thought would be a good fit for his granddaughter. As a teen, Helaine wasn’t interested in rowing, so she tucked the letter away and eventually forgot about it.

When she found it over a decade later, she was two years into her journey running CITRYROW: The company she founded to modernize rowing through vibrant fitness studios and at-home exercise experiences.

“The company was at a definite inflection point when I found it,” she reflects. “I was feeling insecure and took the letter as a nod of confidence from my grandfather to keep going.” Six years, three studios, and a digital platform later, the letter still hangs in her office.

I was grateful to hear about Helaine’s special family story and learned a lot from our conversation. Here are a few of the insights on risk-taking and health I’ve been thinking about since.

“Jump in but know that the water is really cold.”

I appreciate Helaine’s risk-taking mantra for its realistic depiction of how it feels to do something outside of your comfort zone. Her honesty makes taking big leaps feel less daunting; When you accept the fear that accompanies risk, you can mentally prepare yourself to overcome it.

As someone who thrives on execution, Helaine naturally has another mantra that can be used to help warm up the water: Chopping wood, which essentially means getting things done.

“The better you get at just diving in and tackling projects, even the really hard ones, the more efficient you are and the faster you move,” she says. “It’s all about velocity. When you feel productive, you become more productive.”

Use these two tips to navigate waiting periods

Some of the most challenging periods of Helaine’s CITYROW journey have been the few instances when she’s needed to wait for others to make a decision that significantly influenced the company’s future, such as securing an investment or studio lease. She offered two helpful tips to navigate these times:

— Let your past wins carry you: “They always say there are the highest highs and lowest lows and that they often come at the same time. You have to let the highs carry you during the lows and trust that they’re coming again soon.” I appreciate this as both a valuable reminder to derive strength from your past achievements and the challenges you’ve overcome as well to have faith in the journey.

— Tap into the power of mirroring: In certain situations, the only way you can accelerate the decision-making process is to use your own communication style to influence others. People mirror your attitude and sense of urgency so it's wise to be clear about next steps and make it easy for them to respond and say yes. “Put your intention out there in the language and vibe you want to receive it,” Helaine adds.

She also brings up a significant point: If your attitude is met with friction, it’s likely a sign that this isn’t the right opportunity. Always be willing to move on when you sense misaligned intentions. A better path is awaiting you.

Helaine has long been immersed in the fitness world and launched CITYROW when she couldn’t find a low-impact yet high-intensity workout after suffering a serious back injury. She’s since adopted an inspiring long-term health mindset which, as someone whose largely assumed I’d simply do certain exercises until I couldn’t, I’m very grateful for.

“As fitness became mainstream, there was a notion that just checking off the exercise box was enough. Today, with so many ways to eat and move, that’s no longer the case.

People are starting to workout at a younger age and more often with the goal of being active throughout their life. When you approach fitness through that lens, you see how the daily wear and tear we put on our body impacts what we can do in the long-term.

The question then becomes: What are the best ways for me to eat and exercise to keep my body well protected in the future?”

I also appreciate Helaine’s insight for its underlying reminder not to make life choices solely to check off boxes - be that in our careers or where we live - but because they’re helping us create the future we truly want.